The history of the art gallery is one wrought with a stuffy and monotonous tradition of spectacle. The form of the gallery environment inculcates the viewer in a sphere of non participatory, stagnant conceit which is destined to end in thin dissatisfaction born of a veiled contempt that has been historically formulated in the age-old relationship between creator and spectator. In this construction, the audience member becomes a passive observer or critical connoisseur, torn between image presentation and dislocated in ideology, existing as mere cattle to be fed and as a certain idiot to be entertained.

It is our contention that through the coordination and facilitation of artistic events within a liberated space, that we can forgo the immolation of the observer by changing his or her experience into one that appeals for a somatic response. Using space accordingly rather than traditionally, which often generates a sterile and formulaic presentation, we are provoking a more robust cerebral experience, one which promotes divergent thinking while perpetuating a tangible connectivity. It is the fundamental orientation of our movement that disparages the sterility of standard art viewing in favor of the dynamic experience of a vibrant dialectic which takes place not only within the interior world of the observer, but through a sequence of creative acts which ultimately facilitate external expression.

Furthermore, our philosophy resides with the structures of life, and not wholly those of art, which has become decadent and overplayed by stretching common discourse into an affinity of pseudo-acceptance that would have emotionless relics displayed in front of frozen white walls. We encourage an open collaboration of all media in order to facilitate vision amid the bleak versions of normalcy, we would have you plant the petal of the violet within the lifeless pages of a black and white dictionary, if only to improve our pages with something real. As people who grace our environment, you exist as those flower petals bursting with vibrancy, and constitute the redefinition of formerly dead work into the true vitality of color that resides in interaction. 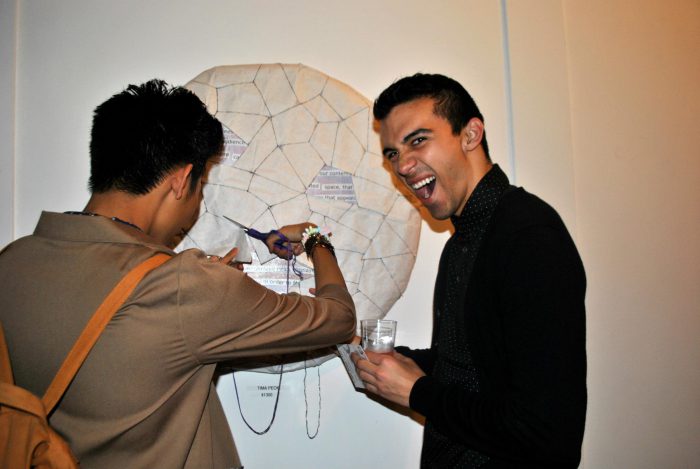